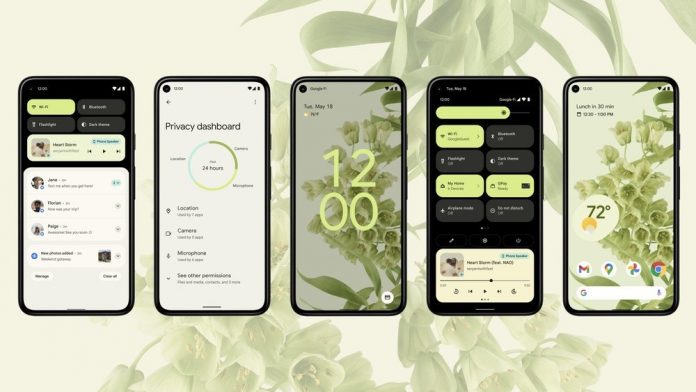 Google has released the Android 12 public beta for pixel devices and selected devices from partners at I/O 2021. This year the Google I/O 2021 held virtually on YouTube. The new Android update Snow Cone brings new features and improvements to enhance the user experience. If you don’t own a Pixel phone you can’t install the Android 12 beta version on your device. Let’s know about the crazy and biggest features coming with Android 12 to your phone.

Google introduces new UI ‘Material You’ at Google I/O 2021. The new UI brings more customization in Android 12 users with the color palette and redesigned widgets. Android 12 uses a color extraction for giving a perfect theme to the phone. It uses the feature called color extraction, upon setting up the wallpaper the OS determines the dominant color and picks the primary and secondary color from it. The extracted color is applied across notification shade, widgets, buttons, quick settings panel, and more.

In the latest OS, not only the UI but also animations got some revamp. You will notice animation on unlocking the phone also the clock on the lock screen gets bigger now. Google has also reduced the CPU time needed for core system services by up to 22%, this will improve the battery life of Android devices.

Quick settings have two toggles that can switch the sensors as mic and camera access for all the apps in one click. Also, the status bar gets the indicators in the top right so you know when apps are accessing the camera and mic.

Apps requesting for location access are given precise location earlier but with Android 12 now you can choose to share proximate location with the apps. Google also introduced a private computer core, it will store all the personal information safe locally on your device.

Easy Wifi Sharing: Android 12 brings easy wi-fi sharing by QR Code. The host has to only scan the QR code to connect to your network.

One-handed mode: The feature is helpful if you have to use the phone in one hand. This brings all the display’s content in one bottom corner or says in half of the screen.

Redesigned widgets: The widgets deisgned are revamp with ‘Material You’ UI brings great look and feel to user.

App Hibernation: App hibernation is for unused apps which are not used for a long time and residing on your phone. This feature will auto deletes all the temporary data and clear the cache of the app.

Splash Screens: The splash screen will be universal for all the apps on the Android 12 device. Whether the developer builds it or not, each app will now open with a splash screen and app icon.

Scrolling Screenshots: The feature is not yet confirmed but rumored to come in next beta build of ‘Snow Cone’

Media Player Revamp: The media player in the notification shade has a new UI. The device play button has changed into an icon, with one tap now you can switch to playback devices.

Clipboard access alerts: Whenever you copied anything in clipboard you will get pop-up alert ‘copied to clipboard’ in the botto of screen.

Game Dashboard: Android 12 brings a new Game dashboard from where you can directly open the game and control the settings to have a good experience.

With Android 12 Beta 1 only few of the features are known. Most of the featured are hidden are not by default. In upcoming beta build and updates Google will push new exciting features to Android 12.