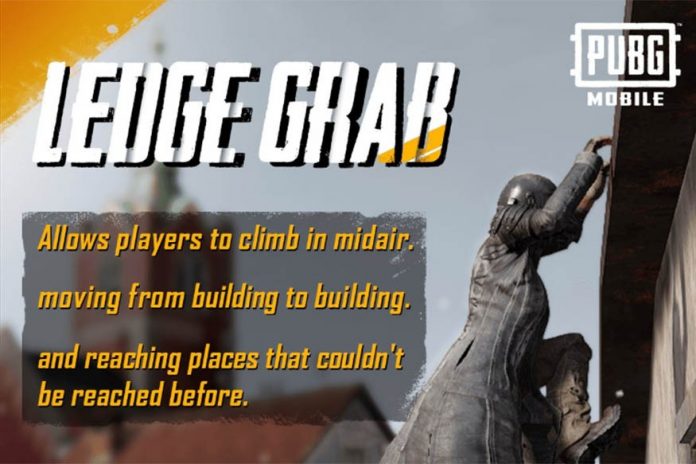 PUBG is a Battle Royale Game available on Mobile and PC. In PC, we all have to chase the airdrops around landed on the top roof. Jumping from one roof to another is not easy or it needs some skills to do so. Now, the upcoming PUBG Mobile New Update 0.15.0 Adds Ledge Grab Feature. The PC version of PUBG has already got this feature in last June. This new feature enables the players to Grab and parkour the roofs in the PUBG Mobile without falling off.

This feature lets the user Grab the airdrops landed on the high roofs. Previously, some areas in PUBG were inaccessible and possibilities to reach are endless.

To jump off the roof to another, all you have to do is jump towards the roof ledge. This feature will end the falling off irritatingly in Georgepool nad Novoprene in Erangel Map in PUBG Mobile. PUBG Mobile update 0.15.0 also brings new weapons as MP5K SMG and Desert Eagle Pistol, both weapons use 9mm ammo. Gas cans will now explode when shot at.

PUBG Mobile new update 0.15.0 will be an awesome update with a bunch of loads. The beta version of PUBG Mobile contains a lot of new weapons, Payload mode, Cans Explode and many more. The new update release date is not been announced yet. Also, the new feature update may bring new unlocked rewards and weapons skins. The user will get skins on the daily Game log in.