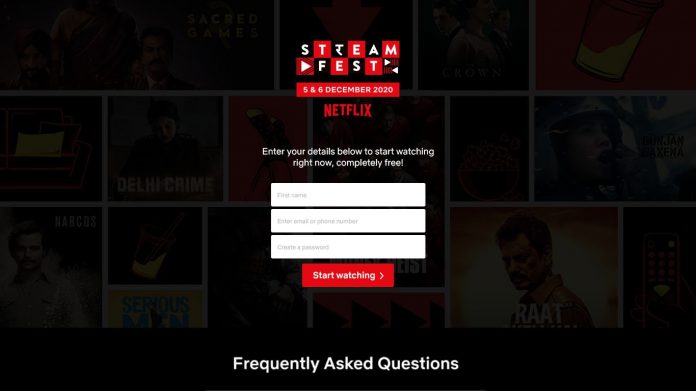 Netflix the streaming giant announced its Streamfest for the first time in India. This streamfest by Netflix will giveaway two days free for Indian users. The Netflix streamfest will start on 5 December and ends on 6th December next month. During the two-day fest, the non-subscribers of the platform will be able to watch Netflix shows for free.

To watch and enjoy Netflix shows in two days streamfest you have to sign up. You can easily sign up easily for Netflix either using your e-mail or phone number with a strong password. Generally, On sign up with Netflix users has to set up a billing method but this streamfest does not require you to do so.

In a blog post Monika Shergill, Vice President, content, Netflix India, “Anyone who signs in during StreamFest gets one stream in standard definition — so, no one else can use the same login information to stream. But, hey, it’s free, so anyone can sign up on their own. And once you sign up via the Android app or a browser, you can use that login to watch Netflix on any device — smart TV, gaming console, iOS device (yes, you can cast too).“

During streamfest the user will be able to access all the options in netflix. You can easily add the stream profiles, kid parental controls. The option during two days Netflix streamfest will be same as a subscriber.

You can preregister to Netflix for two days screamfest by visiting Netflix.com/Streamfest and set a reminder. Netflix is also offering specific offers on 3 months and yearly plans to some user’s accounts. You can check by checking the plans if your subscription is about to expire.