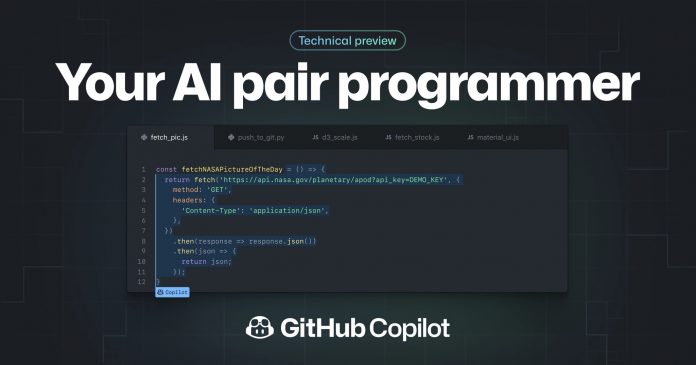 Last year, Microsoft gets an exclusive license for OpenAI’s GPT-3 language model. OpenAI GPT-3 is one of the biggest language models. Github, owned by Microsoft announced a pair programmer tool called Github CoPilot, the AI tool converts comments to auto-generated code snippets. The tool is a part of the Visual Studio Code marketplace and it is free, open-source.

GitHub CoPilot is powered by OpenAI Codex, it is a new AI system created by OpenAI. According to GitHub, the CoPilot always generates unique code. It does not copy or repeat any snippets.

The GitHub CoPilot analyzes the code you have already written and generates new matching codes in the same programming language. On websites, there are examples of automatically writing code in Python, JavaScript, TypeScript, Ruby and Go. OpenAI CTO Greg Brockman describes CoPilot Codex as a descendant of GPT-3.

Copilot website says, “Due to the pre-release nature of the underlying technology, GitHub Copilot may sometimes produce undesired outputs, including biased, discriminatory, abusive, or offensive outputs”.

A test performed by on GitHub and Microsoft developers found that Copilot generates only 1 recitation event every 10 user weeks. Right now the tool is in technical preview but you can sign up and join the waitlist. The VS Code extension for GitHub Copilot is available for install.